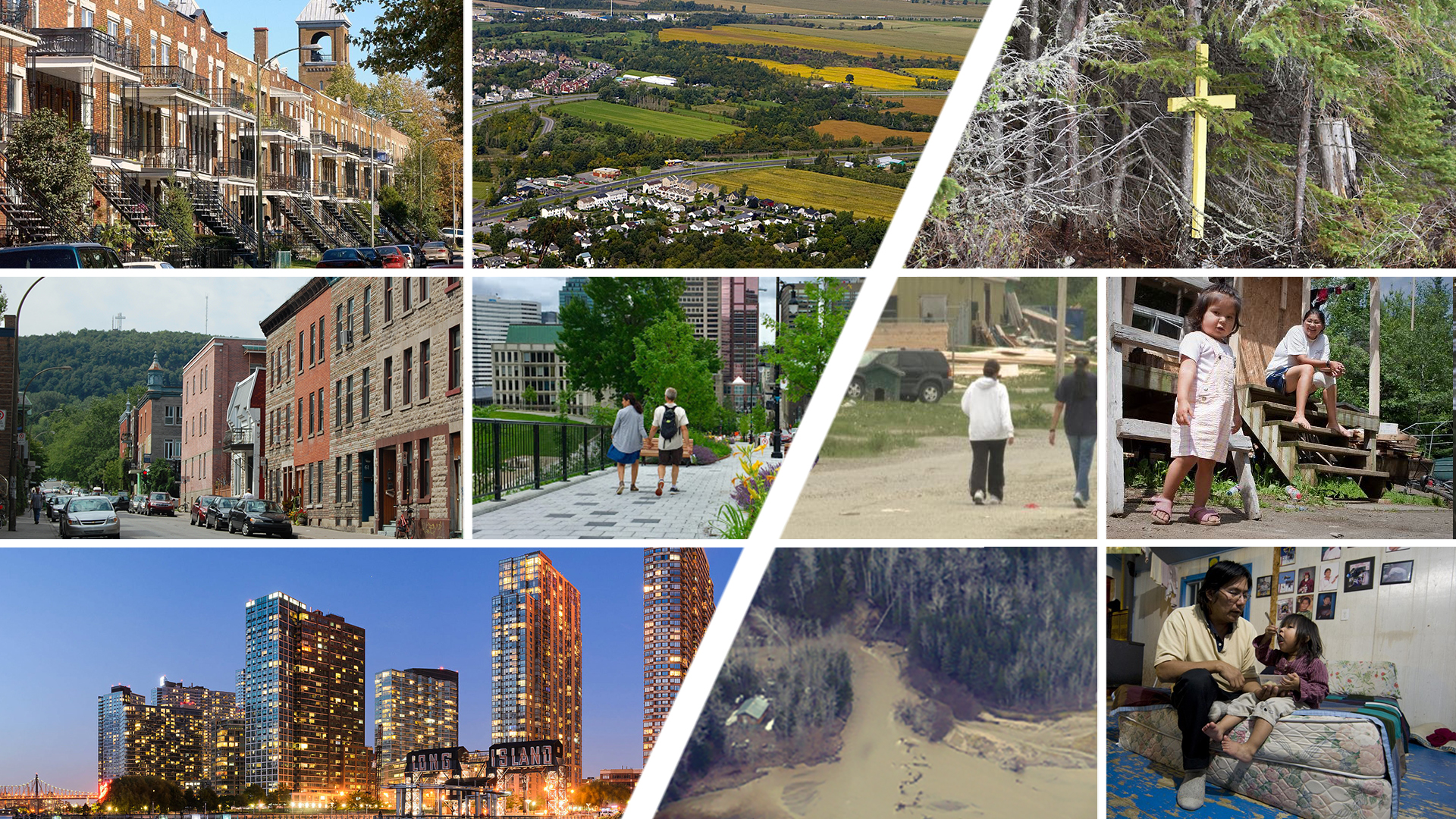 Over the past hundred years or so, First Nations have borne the brunt of successive hydroelectric developments that have allowed Quebec to industrialize and the majority of its citizens to access a better quality of life. These successive and massive hydroelectric developments in traditional territories have never translated into a better quality of life for the members of the communities involved. On the contrary, the occupation without warning and the irreversible industrialization of traditional territories has disrupted the way of life and the socioeconomic balance of the communities.

Pessamit and Wemotaci are by far the most impacted by these hydroelectric developments. In addition to being driven out of our traditional territories, we have been excluded de facto from the improved quality of life desired by governments for the non- Indigenous citizens of Quebec. By leaving our communities without resources and without compensation, the Government of Quebec, with the tacit complicity of the Government of Canada, has established two classes of citizens in the province. This state of affairs continues today since the Government of Quebec is still unwilling to respond to our legitimate and repeated requests to resolve these historic injustices. Let us recall that after having been stripped of the ability to pursue our traditional way of life on our historic territory, our members were brutally pushed into the cramped limits of the reserves and thus forced into idleness. This policy of cultural genocide still has serious consequences for the socioeconomic status of Pessamit and Wemotaci today. Indeed, all internationally recognized well-being indicators show that we are far behind compared to the entire population of Quebec and Canada. Even worse, the indicators which concern us are comparable to those of Third World countries.

These changes by Hydro-Québec have also profoundly changed the course of history by violating, with impunity, ancestral rights and the spirit of the historic treaties entered into with France and England. What is more, the contemptuous manner in which these projects were set up and are still operated violates the United Nations Declaration on the Rights of Indigenous Peoples and our rights enshrined in the Canadian constitution.

The most recent legal episode in the Quebec government’s crusade to evade the ancestral rights of the First Nations ended in 1996. The Supreme Court of Canada then definitively put an end to Quebec’s claims that the First Nations had no ancestral rights over the territory of the province. The illegitimate position of the Government of Quebec nevertheless had given it enough time to de facto dispossess the First Nations of their traditional territories. This Supreme Court decision did not, however, convince Quebec to apply the necessary corrective measures. Since then, successive provincial governments have embarked on a strategy of perpetually delaying enforcement of the Supreme Court ruling. In doing so, Quebec has awarded itself a suspended sentence. It is therefore clear that Quebec’s position, both historically and now, remains immutably the same, namely not to apply the constitutional principle of the Honour of the Crown.

The Wemotaci Nitaskinan is impacted by the presence of eleven (11) hydroelectric installations, nine (9) of which have never been the subject of consultations and even less of accommodations on the part of the Government of Quebec and Hydro-Québec. These production facilities were commissioned between 1911 and 1958. The total capacity illegitimately installed on the Wemotaci Nitaskinan is 1,892 MW.

Our two communities were dispossessed of their lands by the Government of Quebec and Hydro-Québec with the consent of the Government of Canada. In total, 21 production structures, some 10,000 km2 of reservoirs, tens of thousands of kilometres of transmission and distribution lines, and new roads, have been illegally installed on our traditional territories. These infrastructures are still operated by Hydro-Québec in violation of the rights recognized by the Constitutional Act of 1982 and the 1996 ruling by the Supreme Court of Canada.

In light of the repeated and unsuccessful attempts by our communities over decades to resolve these historic injustices, it is obvious that the Government of Quebec and Hydro- Quebéc have never been interested in settling the matter. It is also evident that the uncoordinated efforts of individual First Nations to obtain justice have merely consolidated the Government of Quebec and Hydro-Québec in their historic position of denial. This observation stems from Quebec’s dilatory process which has been going on for decades. It has been incredibly effective in thwarting any possibility of settlement.

The Innu and Atikamekws have never been conquered, have never ceded their rights, nor accepted the extinction of these rights. Currently, 33% of the total hydroelectric power installed by Hydro-Québec comes from our territories protected by ancestral rights and treaties. The illegitimate and unconstitutional seizure of these lands on the part of the Quebec government and its Crown corporation for nearly a century must end. The same is true of the appropriation of production income.

The opportunity to re-establish the balance of power between our First Nations, governments, and Hydro-Québec has now arrived. This opportunity is even more important given that Hydro-Québec’s export intentions are contested in the United States. This is easily explained when we see that the residents of Maine would have to experience the long term impacts of a transmission line to Massachusetts when they would derive little or no benefit from it. The people of Maine find themselves to some extent in the same situation that was imposed in the past and which still affects our First Nations. Pessamit and Wemotaci intend to testify in the United States concerning Quebec and Hydro-Québec’s age-old way of doing things. The similarity of perpetual inequities targeting the weakest is indeed outrageously startling.

In terms of legitimacy of action, we remind that 33% of the energy that Hydro-Québec intends to sell in the United States has been appropriated from Pessamit and Wemotaci. We are therefore fully entitled to participate in the debate to protect our interests. To do this, we have arguments and irrefutable evidence to show that the government of Quebec, through its Crown corporation and with the complicity of the Canadian government, has seized the resources of our territories without regard to ancestral rights, under Aboriginal title and the Canadian Constitution.

The injustices described above also affect other Atikamekw and Anishnabe communities which should also make their voices heard soon, together with Pessamit and Wemotaci. Hydro-Québec has never had and still does not have the moral and constitutional legitimacy to operate 33 of the 63 production facilities on the traditional territories of the three aforementioned First Nations. This is 52% of the Crown corporation’s generating fleet. Hydro-Québec has even less the legitimacy to sell electricity in the United States when 13,179 MW, or 36% of the installed capacity in Quebec has been usurped. The First Nations concerned will not allow Hydro-Québec to benefit from their heritage without openly taking part in the debate currently underway in the United States.

The time has come to expose more broadly the situation that prevails in Quebec regarding the rights of First Nations, specifically to potential Hydro-Québec customers in the United States. The imminent contribution of Pessamit and Wemotaci to the permitting processes in the State of Maine could be decisive for the future of the export of electricity to the United States, more particularly if firm commitments are not made publicly and promptly to us on the international stage.

With a view to an international debate, the governments of Quebec and Canada will be invited by Pessamit and Wemotaci to express their views unequivocally: either endorse Hydro-Quebéc’s approach to the detriment of the Honour of the Crown principle, or make a formal and swift commitment to respecting our constitutional and human rights.

As part of the previously explained context, we respectfully wish to inform you of the common approach we are undertaking without delay in the United States. However, we agree to postpone it as soon as we obtain the following commitments from the governments of Quebec and Canada. First, that our members will henceforth be treated according to the same standards of fairness as those applied to non-Indigenous citizens of Quebec and Canada. Secondly, that the collective compensation which is due to us for the damages which have been caused to us by the unconstitutional hydroelectric developments be paid to us immediately.

The Chief of Pessamit,
René Simon

To view the letter in pdf format: Letter to Quebec’s Prime Minister